Been listening to Caspo battling on co open radio since I was twelve, long live Canadian massacres like THE SDK.

Beauty of the streets : the art surrounding our lives is what inspires us, creativity/graffiti should be considerably rethought… Graffiti is art, art of expression beyond barriers and for that silly reason has been given a bad wrap, it is illegal on anyones property other than your owns in most parts of the world for various is unaccepted. Perhaps graffiti should be looked at far more closely than the simple thought of destruction, vandalism or a crime…  Tourism is a large part of the economy most communities and perhaps the ideology that street art would un-encourage the camera frenzy people visiting. Why should society be bombarded with advertisement but not by paint, marker, or art in general. Take a minute to understand that having a city without beautiful free street artwork would make for many negative changes. 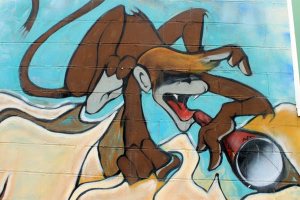 There are what seems like infinite walls preventing this art. What barriers are to break doing street art can be though of in endless ways. The danger of being constantly conflicted to laws, bylaws, police and business owners graffiti makes it hard to express. A graffiti artist risks criminal records and fines but to defend themselves Graffiti blossoms in special areas of our cities by legal walls, art installations but it is very scarce. Not only is legality an issue to deal with for street artists is financing they’re artistic endeavours. The government agenda is that all graffiti should be taken as an offence and considered worth spending millions to destroy graffiti by means of painting over it or (buffing it)  making street art seem unwanted entirely, and making the reputation of an artist negative;(considering them a criminal). Art crimes are beautiful and an important part of the art community, legal or not.

Steps taken to make street art or graffiti are very slowly on the rise in vancouver as many business owners pay a great deal of money for street art murals on they’re business or property which is a great step, but could it be possible to legalize many areas for public artistic expression and graffiti. Perhaps property owners would label they’re walls as legal graffiti walls to give back to the community through such a gift. Imagine for a second that walls were labelled as public art spaces where anyone at anytime could use to do art. Art would be legally flourishing amount what was wasted space ,there would be no reason to police these walls, there would be no reason to buff these walls. If this were to exist there would be a safe way for graffiti and or any other art form to flourish without the negative stigma and police wasting they’re time on art.